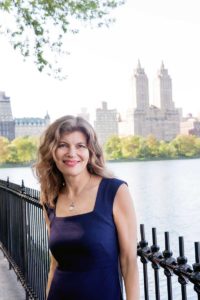 Marylene Smeets (1968) is a Dutch human rights specialist with passions for Latin America, New York, and writing. She combines her background and passions by working for the Americas Division of the UN Department of Political and Peacebuilding Affairs in New York and, in the early morning, dedicating time to her book, Merciless Gift — Opened in New York.

Marylene studied law at the University of Amsterdam and international relations at the Bologna Center of the Johns Hopkins University’s School of Advanced International Studies. From 1994 to 1997, she served with the UN mission in Guatemala and from 1997 to 2002, she worked for the New York-based nonprofit Committee to Protect Journalists. She then started her job in what at the time was called the UN Department of Political Affairs.

In 2013, Marylene went on unpaid leave to start writing her book in Amsterdam. She took a course in free-lance journalism at the Hogeschool Utrecht and a course in fiction writing at the Gotham Writers Workshop in New York. She wrote articles for, among others, the Dutch edition of Marie Claire, the Dutch daily Trouw, and the Belgian daily De Morgen. On behalf of the Committee to Protect Journalists, she published articles in, among others, the US newspaper Houston Chronicle, the Dutch daily Het Parool, and the Argentinian magazine Noticias. She has written a number of short stories — including for her nieces and nephews.