In my book, I regularly mention “cheap eats”: inexpensive culinary adventures that three friends and I undertook once every few weeks. (Cheap eats feature in my book because the other “cheap chicks” — as we’ve come to call ourselves — often gave me the most brilliant advice during those dinners.)

Over the years we have been to countless great restaurants. Many have gone under (rest in peace, Tehuitzingo Mexican Deli & Taquería…), but some of our favorites seem to be doing great. Here is a selection for readers who live in New York or are visiting the city and who would like to celebrate the diversity of The Big Apple with a (sometimes fairly…) cheap culinary adventure.

Via new.mta.info it is easy to figure out how to get to the different places. Below the restaurants’ websites, I am posting their Yelp reviews for more recent experiences. 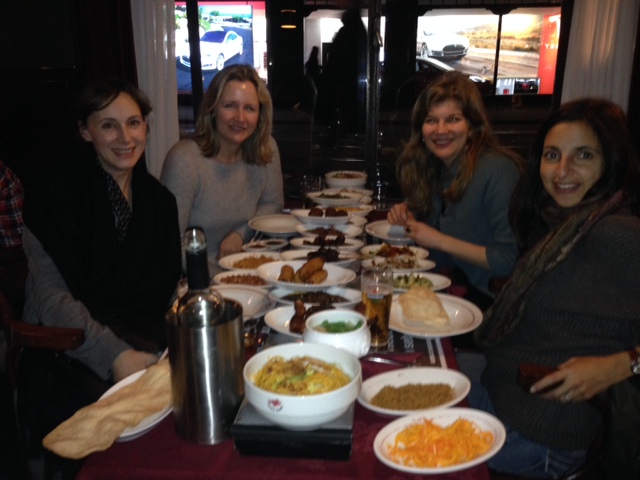 The “cheap chicks” in Sama Sebo, an Indonesian restaurant in Amsterdam, during the unpaid leave I took to start writing my book.

Soul food restaurant in Harlem with images of African-American heroes on the wall.

A small restaurant place in Alphabet City which does not have a bathroom (but there is a restaurant nearby with friendly service…). The arepas are made from corn and therefore gluten-free. They taste delicious!

While we were looking forward to our pizza in this pizzeria in the heart of Brooklyn, owner Dom — wearing white shorts and an apron — was cutting fresh basil for it.

Special experience! In a space that resembles a gymnasium under an Indian temple in Queens, we got an enormous amount of food for $9. By closing time the restaurant still had many containers with goodies left; we were given a pile of them to take home.

A Serbian-Croatian restaurant in Alphabet City which also offers a good brunch. On the terrace, one can savor street life on Avenue C.

Even if it is located along a less attractive part of Broadway, La Cabaña Salvadoreña is a cozy little restaurant in Washington Heights. It serves delicious versions of the Salvadoran specialty popusas (made from corn and therefore gluten-free).

We seemed to be the only non-African patrons of this Ivorian restaurant in Harlem!

A fantastic Jamaican restaurant in the Lower East Side: colorful decor, lots of plants, Caribbean music, warm service, tropical drinks and delicious food. (Admittedly, not the cheapest…) In corona times, Omar’s Kitchen offers the excellent option of eating next to the sidewalk under an awning: it kept us dry during a downpour. When I went back on a brisk night, outdoor heaters kept us warm. 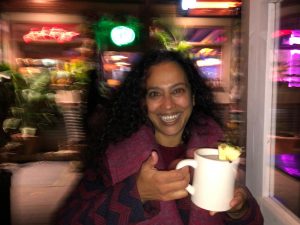 This Thai restaurant in Queens was our first cheap eat (in 2004!). It was recommended to us by the Thai babysitter of the “cheap chick” who in Merciless Gift goes by the name of Karlie. Before embarking on this adventure, Karlie wrote something like: “Formica tables, neon lighting, cash only — excellent!” Such a simple place with renowned cooking was exactly what we were looking for when we resolved to go on cheap culinary adventures once every few weeks.

You might find it hard to believe your eyes when you step into this Uzbek restaurant in Queens: it is like taking the metro to Central Asia! The waiters hardly spoke English, but served us tasty meat with potatoes soaked in fat. The night we were there patrons were singing and dancing — fantastic!

Classic “cheap eat” in Hell’s Kitchen. Among mainly Asian fellow guests, the three of us enjoyed delicious noodles for a total of $37. There was so much left over that two of us took home doggy bags, which made for delectable lunch the next day.